"The Invention of Creative Writing": Talk by Dr. Saikat Majumdar DEH Seminar Series Fall 2020 began with a talk titled “The Invention of Creative Writing” by Professor Dr. Saikat Majumdar from Asoka University on 21 November 2020. Dr. Majumdar, Indian novelist and critic, is Professor of English and Creative writing at Ashoka University. After the inauguration of the seminar and the series by the Dean of the School of Arts and Humanities, Professor Kaiser Haq, Dr. Majumdar was introduced by the Pro-Vice Chancellor of ULAB and the Head of DEH, Professor Shamsad Mortuza. 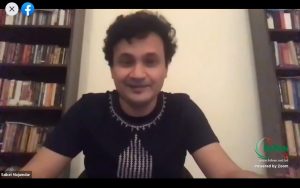 Professor Majumdar started his discussion by centering on the idea that “language is not a mere reflection of reality; it also creates reality.” He then delved into a discussion of the recent invention of the discipline taught in universities under the title of “Creative Writing.” He explained that before the invention of the novel, artists and writers did not tend to think of themselves as creative or original artists or writers, rather believing that doing art or literature was part of the casualty of popular culture by which people did or achieved things. He argued that in recent times, the craft of arts and creative endeavors, especially the craft of creative writing, has emerged as a discipline because the craft reached that level of sophistication and systemization to be worthy of being considered as a discipline. The discussion generated an enormous amount of curiosity and students and international participants at the webinar, intrigued by his words, posted comments in the chat box, asked questions, and became involved in the discussion during the Q & A session with the speaker.