On Monday, June 6, the Center for Enterprise and Society (CES) and the Department of Media Studies and Journalism at the University of Liberal Arts Bangladesh (ULAB), in conjunction with the Center for Policy Dialogue (CPD), arranged for a seminar titled “State of the Bangladesh Economy FY 2015-16 and National Budget FY 2016-17.” The talk was held at ULAB Campus-A Auditorium.

Professor Mustafizur Rahman started by detailing the impressive strides Bangladesh has made in the last 15 years, from being a predominantly aid-dependent nation to being a trading nation. At present, Bangladesh exports $30 billion, remittance is around $15 billion and aid is around $2 billion. Food production has also increased dramatically in that time frame which is impressive given the limited land. He said that Bangladesh as a nation have to get to a double-digit growth rate ala 19th century Japan and 20th century Singapore and South Korea. If Bangladesh grows at 10% annually, every 7 years we can double our per capita income, and in 21 years, our per capita income will increase 8 times. This is the vision we ought to set ourselves. 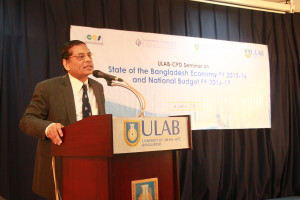 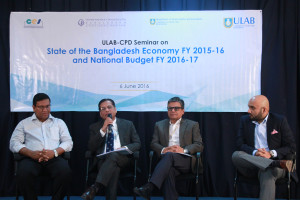 Following Professor Mustafizur Rahman’s talk, CPD Research Felllow, Mr. Towfiqul Islam detailed the implications of the budget across sectors, challenges with revenue generation and achieving set targets, as well as the importance of successful implementation. He prioritized the public finance framework and indicated how a large part of the revenue may come from VAT and a large part from income tax. On the expenditure side, the budget appears to be well-planned. The budget is trying to correct past mistakes by allocating more to Education, Health and Public Services. Following the two presentations from CPD, a panel comprising of Professor Mustafizur Rahman, Mr. Towfiqul Islam, Professor Imran Rahman, and Mr. Sajid Amit took questions from the audience and offered their insights into the National Budget and its implications.