Ms. Juditha Ohlmacher, Member of Board of Trustees ULAB welcomed Nobel Laureate Professor Muhammad Yunus, popularly known as the Banker to the Poor.

In his speech, Professor Yunus highlighted the pertinence of Social Business in concurrent world. Professor Yunus said the purpose of social businesses is to collaborate with each other. He said that no individual should be unemployed because every person has some creativity. By properly utilizing one’s creativity, one can develop oneself and the society. Professor Yunus stressed on the idea of three zeros – zero poverty, zero unemployment and zero net carbon emission. Professor Yunus encouraged ULAB students to envision a future beyond regular jobs and aspired them to start their own social business ventures. Later, he answered various questions of the students on social business. 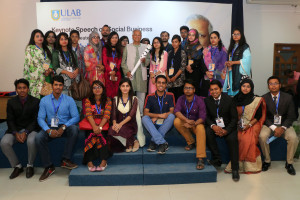