The Department of English and Humanities organized a series of workshops on Soft Skills, the sessions of which were conducted by the faculty members of the department. The four sessions of the Spring 2018 series were on Email Etiquette, APA Style, Public Speaking & Presentation and lastly, CV & Cover Letter Writing.

The first session on Email Etiquette was conducted by Dr. Sohana Manzoor on 28 March 2018. 20 students of DEH attended the session. Basic rules and etiquette of formal and informal emails were discussed and practiced with examples.

The second session, Public Speaking & Presentation Skills, was conducted by Jennifer Eugene Reid on 2 April 2018. It was attended by 30 students of the department who enjoyed this useful session where Ms. Reid shared some primary dos and don’ts of public speaking and presentation.

The topic of the next session was CV & Cover Letter Writing which was conducted by Dr. Mahruba Tasneem Mowtushi the following day, 3 April 2018. It was attended by 21 students. Dr. Mahruba also emphasized on the importance of a proper CV and Cover Letter in professional life.

The fourth and last session of the series was on 4 April 2018, on APA Style which had the basic rules of using APA Style in writing as its content. This session was conducted by Dr Asifa Sultana in which 24 students were present. Important reference links were provided to the students to follow APA style when needed. 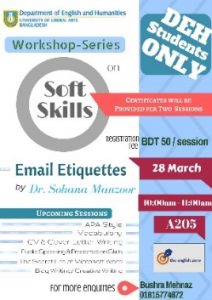 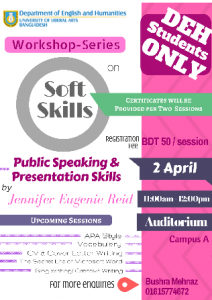 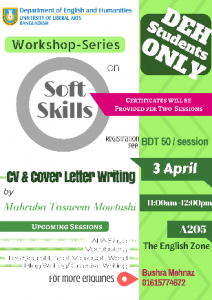 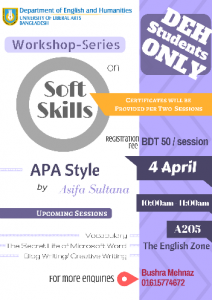 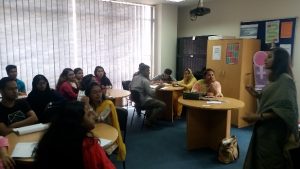