Creative Time Summit X Screening and Art Exhibition was organized by the Department of Media Studies and the ULAB Art and Photography Club along with ULAB’s public relations-based apprenticeship program, PR4U at Campus A auditorium of the University of Liberal Arts Bangladesh (ULAB) On Friday, 15th November 2019.

The program started at 3:30 pm. The event was hosted by Wafi Aziz Sattar, Lecturer at the MSJ Department of the University of Liberal Arts Bangladesh. The event was graced by the head of the Media Studies and Journalism Department, Dr.Jude William Genilo, along with respected faculties and students.

The program had Mr. Quazi Rownaq Hossain, the founder and editor of ‘The Sargam’ magazine as a Chief Guest.

ULAB took part in this event for the sixth time this year under the creative vision and the direction of Mr. A.F.M. Moniruzaman Shipu, Assistant Professor at the MSJ Department. A video was screened at the event where Mr. Shipu talked in detail about the artist’s vision and how the interactive graffiti was created.

In the second segment of the event Mr. Hossain and Mr.Shipu was invited on the stage for an interactive discussion session, following that they had a blazing question-answer session.

Head of Media Studies and Journalism Department, Dr. Jude William Genilo later expressed his thoughts on the summit and gave his vote of thanks to everyone.

Dr. Genilo, Mr. Hossain and Mr. Shipu then handed certificates of participation to the artist of 2018 and 2019 interactive graffiti for the creative time summit.  At the end of the event Dr. Genilo presented a token of appreciation to Mr. Quazi Rownaq Hossain. 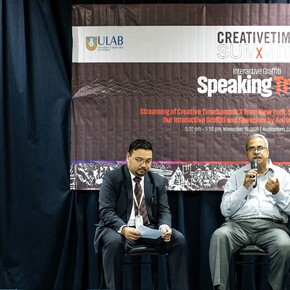 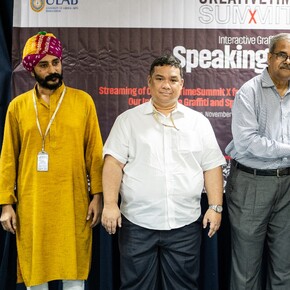