For the Fall’19 term, the department proposed “Conditioning”, a study by Pavlov on the process of training or accustoming a person or animal to behave in a certain way or to accept certain circumstances, as its subject of research.

Based on this, the students of the MSJ Department showcased various artworks in the form of street arts, masks, posters, photographs, digital productions focusing the theme.

The visual art exhibition was showcased at the ULAB permanent campus in Mohammadpur and was inaugurated by the chief guest, public anthropologist and columnist Rahnuma Ahmed at 11:00 a.m on January 4, 2020.

The second half of the program was continued at Chhayanaut Auditorium wherein a debate on the topic Bangladeshi Journalists Condition Society to upload social peace was held where, Sushmita S. Preetha, the Editor of The Star Weekend, graced the event as the judge.

The program came to an end at 5:30 p.m with the students buzzing with enthusiasm. The day ended marking the end of yet another successful Curriculum Integration program for yet another semester until next time. 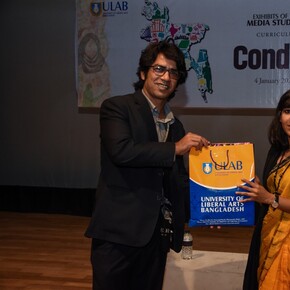