The convening committee of the alumni association of the Department of the Media Studies and Journalism (MSJ) of the University of Liberal arts Bangladesh (ULAB) was formed on February 7, 2020. A 15-member committee was declared following an alumni meeting that took place at the permanent campus auditorium in Mohammadpur. 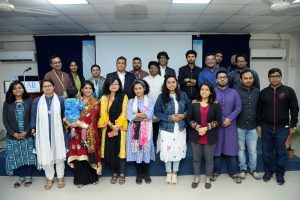 Photo: Convening Committee of the MSJ Alumni Association along with the Faculty Members.