Professor of World Literature at Georgetown University in Qatar, Dr. Ian Almond, was the speaker of the second seminar of the DEH Seminar Series Fall 2020. His talk, titled “The Hotel Narrative in Turkish, Mexican and Bengali Fiction: Anayrt, Shahjahan, and Isabel,” was held on November 27, 2020. 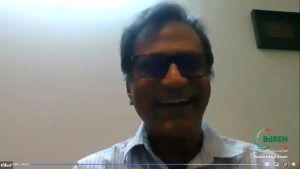 The seminar began with an introductory speech by the Dean of the School of Arts and Humanities, Professor Kaiser Haq.

This was followed by Professor Ian Almond’s talk. In his presentation, Dr. Almond discussed three novels from three countries: India (set in Bengal), Turkey, and Mexico to show the thematic generalities in the genre of hotel narratives, namely, the nostalgia of empire, obsession with the historicity of the hotel itself, persisting melancholy spurred from the dissolution of identity, hotel as a secular space – more specifically a godless space which facilitates femicidal misogyny and suicide. 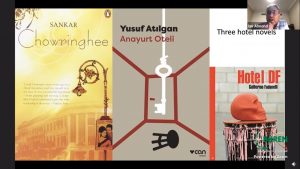 He pointed out two theoretical avenues to look into these themes, one is psychoanalysis, through which the psychopathology of the people involved with hotels (the customers, the owners, and the employees) who are sexually frustrated could be examined, and another one is the “historicizing attitude towards the secular [modernity]”. 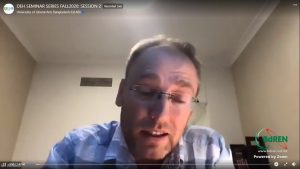 After his intriguing talk which, according to Professor Shamsad Mortuza, Head of the Department and the Pro Vice-Chancellor of the university, opened new windows of research within the discipline of literature, Professor Ian Almond answered several questions from the audience.

The seminar ended with the vote of thanks delivered by Professor Shamsad Mortuza. 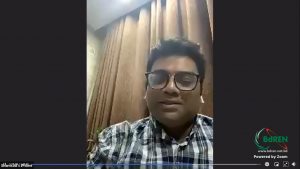 Watch the full video of the program here: