The Department of English and Humanities at ULAB held a workshop on November 29, 2020 titled, “Digital Humanities: A New Approach to Scholarship” facilitated by three PhD candidates from the University of Maryland, USA. The facilitators were Sohana Nasrin, Bobbie Foster Bhusari and Md. Mahfuzul Haque. 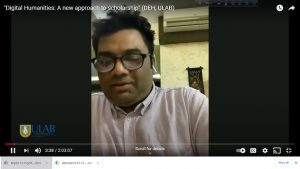 The workshop began with an introductory speech by the Head of the Department of English and Humanities and Pro Vice-Chancellor, ULAB, Professor Shamsad Mortuza.

Then, in her presentation, Sohana Nasrin discussed how aspects of humanities and traditional topics are studied under the lens of digital humanities (DH). She also mentioned that through this integrated discipline, many communities are creating discourses and events online. She also shed light on the encounter between traditional humanities and computational methods through textual analysis, social network analysis, topic modeling, geo-spatial analysis, and data journalism. The importance of critical inquiry of modern digital objects or culture was elucidated. 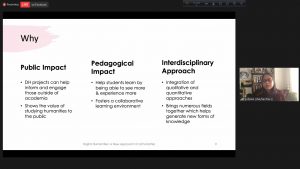 The presenter then talked about new modes of knowledge formation enabled by digital tools and networked environments. In this connection, in a Venn diagram, she placed meme, Wikipedia, software studies, time and place, hacker culture, data journalism, new media, computational methods, etc. Furthermore, she described the timeline of digital humanities. After an overview of the contents, methods, tech, and collaborations in the field, she focused on the topic of humans and machines where surveillance, misinformation, conspiracy theories, consumerism and trolling were conferred. She then discussed the importance of adopting a critical lens in evaluating machine works. 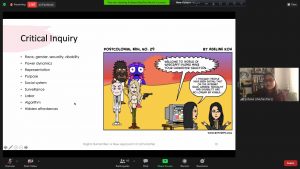 Nowadays, librarians, data scientists, journalists, scholars and activists are using digital humanities to present their individual tasks and findings in a humanistic way. In response to the question of why we should use digital humanities, the facilitator mentioned certain impacts namely public impact, pedagogical impact, and interdisciplinary impact in our everyday lives and explained how those are encouraging more participations in DH. Lastly, she touched on the “how to” part of DH where she named curation, analysis, editing, and modeling as ways of using digital humanities. 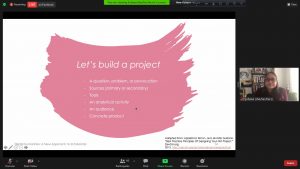 The second facilitator, Bobbie Foster Bhusari, focused on the cultural heritage rhetoric in Internet memes. She began her presentation with a cultural approach to studying digital culture. She also mentioned that digital culture was a term used by many scholars although it was not fully defined. She discussed how we shape technology and technology shapes us and, in the process, technology is constantly changing us and our relationship with the environment. The decolonial approach to assessing works and labor in the tech industry was also deliberated upon. How industry and culture inform scholarship, how modernity is viewed in the process of DH, the significance of diverse understanding in the digital culture era were topics that were covered. 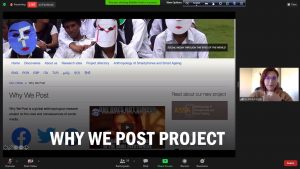 The role of memes was looked at from a unique point of view. A meme refers to remixed media that calls for participation, remediation, bricolage, and the process of knitting together. Memes also change meaning and purpose of a certain medium with a specific contextual background. They also serve political roles along with providing entertainment to its audience. Bhusari also spoke of how, in digital culture, we tend to perform different identities based on the need to be recognizable and to fit in. In this regard, selfies were also brought into the discussion. Selfies are no longer mere photos but different levels of communicative strategy as well as markers in forming identities namely masculinity and femininity. Bhusari said that it is safe for us to express ourselves online and thus, online identities can be used as tools for our benefits. However, both on and off-line experiences shape peoples’ overall identities. She then discussed new pathways for DH, outreach and activism as well as the ethical considerations in researching under digital humanities. 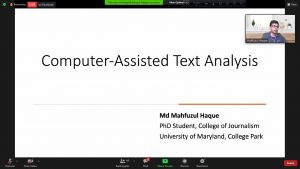 The third facilitator, Md. Mahfuzul Haque, elaborated on computer assisted text analysis. He focused on tweets, Facebook posts, and other conversations from social media as the source of data in text analysis. As the potential analytic angles, he named understating topics, analyzing public sentiment, identifying parts of speech, and examining geo-tags. He mentioned two programming languages, Python and R, to carry out this sort of research. For data collection and processing, he presented the example of the road safety movement and the tweets about it. The tweet collection was done through Twitter API, followed by data cleaning, processing, and analysis. 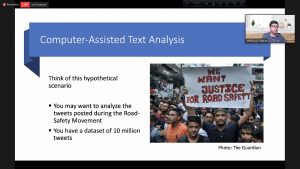 In topic modeling, he defined the term and mentioned two types of modeling, dictionary-based and unsupervised topic modeling. After briefing on each of the types, he moved on to the significance of human intervention in machine-processed results. According to him, at times, machine-generated topics might not make sense where the critical and analytical interpretations on the human end is necessary. 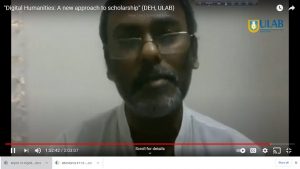 Finally, the facilitator talked about the research done on combating online misinformation in Bangladesh. He wrapped up his discussion by providing possible solutions to reduce the amount of misinformation and the unfortunate consequences because of it among Bangladeshi citizens.

After the highly interesting and informative discussions, a formal question/answer session was held where the audience eagerly expressed their curiosity about the subject matter.

The event ended with a vote of thanks by Dr. Mahmud Hasan Khan, Associate Professor of DEH, ULAB. 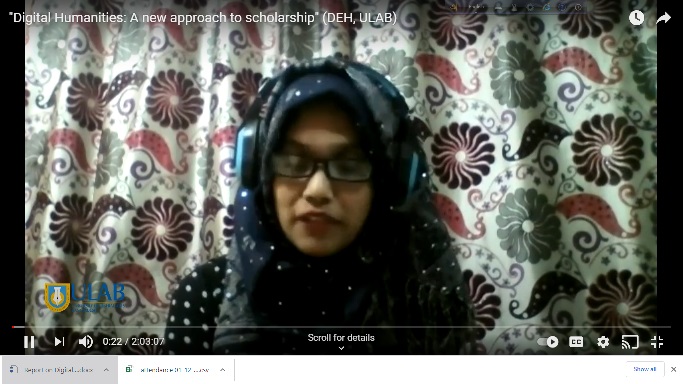 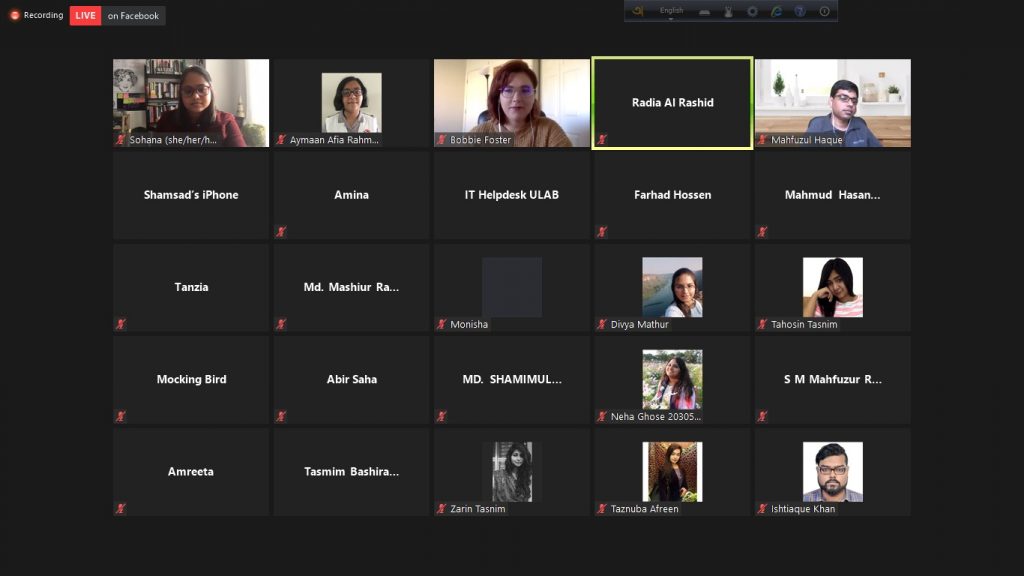 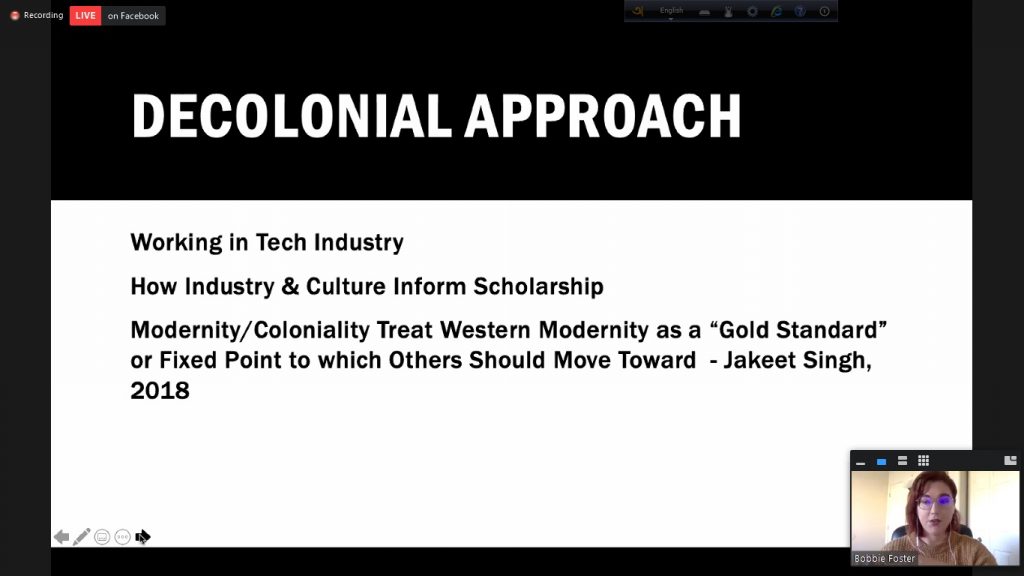 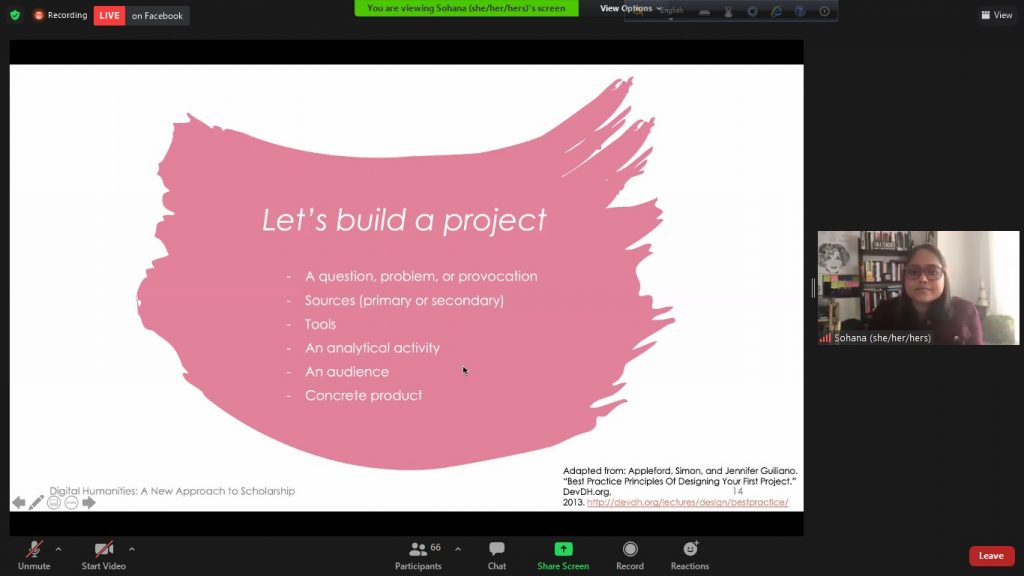