“Nationalism to Cosmopolitanism: Rabindranath Tagore’s Journey as an Educator”:
Talk by Dr. M A Quayum 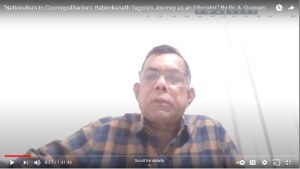 Dr. Mohammad A. Quayum, an Honorary Professor at Flinders University and an Adjunct Professor at the University of South Australia, presented a session titled ‘Nationalism to Cosmopolitanism: Rabindranath Tagore’s Journey as an Educator’ as part of the Fall 2020 Seminar Series organized by the Department of English and Humanities at the University of Liberal Arts Bangladesh (ULAB) on 2 January 2021. The webinar began with an introductory speech by the Dean of the School of Arts and Humanities, Professor Kaiser Haq. Then Dr. Mohammad A. Quayum started off his talk by presenting a brief overview of his presentation, which showcased Rabindranath Tagore’s shift from nationalism to cosmopolitanism.

Prof. Quayum discussed various aspects that influenced and shaped Tagore’s perspective of the educational system. He then proceeded to chronol 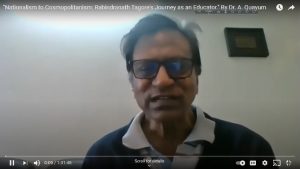 ogically map Tagore’s venture into the educational enterprise citing quotes from the memoir “On the Edges of Time.” According to Dr. Quayum, Tagore developed a distain towards colonial education and the various impracticalities that resulted from such repressive institutions, labeling them, tyrannical, unemotional, uninspired and unimaginative. The presentation then moved into Tagore’s aversion to religious orthodoxy as evidenced in his short story “Khata.” Following that, Dr. Quayum discussed how Tagore started and ran his own school with principles that stood in stark contrast to colonial schools. Though Tagore’s educational philosophy is idealistic and mainly concerned with the spiritual development of the students who wouldn’t seek knowledge for material gain, Professor Quayum opined that, himself a practical man, Tagore did not decline the practical use of the knowledge. Throughout the seminar, Professor Quayum explained how and why the contemporary market-driven educational philosophy should borrow from Tagore’s educational philosophy in order to overcome the socio-cultural crisis. Dr. Quayum ended his talk by discussing Tagore’s intent to unify the east and the west through peace, acceptance, and harmony 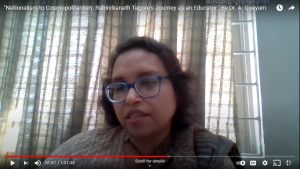 The Question and Answer session bookended Dr. Quayum’s insightful talk where various compelling inquires were made and addressed the legendary icon. The webinar, attended by academics and students from several universities, ended with concluding remarks and a vote of thanks by Dr. Shamsad Mortuza, Head of the Department of English and Humanities and Pro Vice-Chancellor, ULAB.