“Learning to Write or Writing to Resist? Linguistic Resistance and Assertion of Self by a Primary School Student”: Talk by Dr. Obaidul Hamid 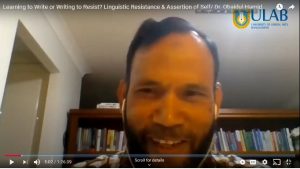 “Learning to write or writing to resist? Linguistic resistance and assertion of self by a primary school student” was the title of the sixth seminar of the DEH Fall 2020 Seminar Series held on January 10, 2021. The speaker of the seminar was Dr. Obaidul Hamid, a senior lecturer at the University of Queensland, Australia. Hosted by Dr. Syeda Farzana Sultana, Assistant Professor, DEH, the seminar was inaugurated by Professor Shaila Sultana, Advisor to the Center for Language Studies at ULAB. 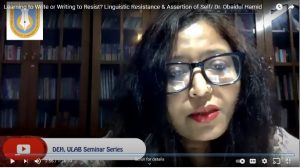 In his talk, Dr. Hamid shared some of the findings of one of his research-in-progress on his own son’s writing. For this research, Dr. Hamid had instructed his son Afeef to write something, anything every day.  Afeef continued this
writing for two years. Dr. Hamid showed how Afeef reacted against this imposition and acted to resist. That meant Afeef may have complied with his father’s imposition, but he resisted by transgressing or crossing linguistic borders. He also used plenty of language play. Dr. Hamid showed some examples from Afeef’s writing corpus, and explained the nature of his resistance. He discussed that there might be some ethical concerns on whether a child should be imposed with the duty of writing or not, but he thinks that his experiment brought good results for Afeef as he became meta linguistically conscious and explored the horizons of language. Dr. Hamid also informed that he is applying his findings on another experiment he is doing with some children from Rangpur, where he is getting positive results. 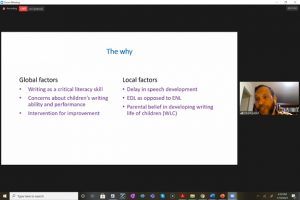 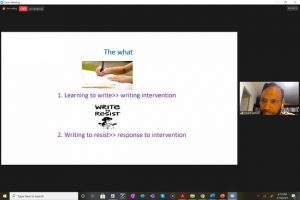 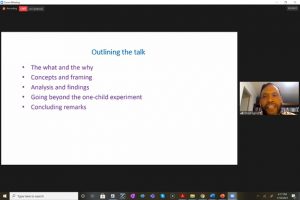 The audience, attending from around the world, was very intrigued by his talk and a very enthusiastic question-answer session ensued. The seminar ended with concluding remarks and a vote of thanks by Professor Shamsad Mortuza, Head of the Department and Pro Vice-Chancellor, ULAB. 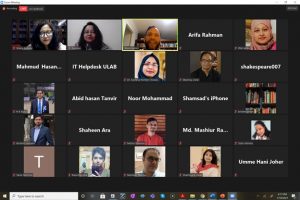