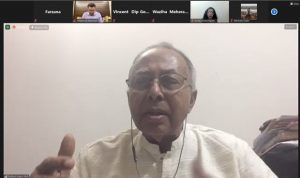 National Professor Dr. Rafiqul Islam has said, “Before the language movement in 1952, there was no proper or significant representation of Bengali Muslims in Bangla literature. It was only after the language movement that a distinct literary language of East Bengal, capable of expressing the distinct East Bengali experience, emerged.” As the keynote speaker, Dr. Islam spoke about the language, literature, and culture of Bangladesh at the First Forum of the 4th Curriculum Integration program to be held at the Department of English and Humanities in Spring 2021. The forum was held on March 14, 2021. (Program video link: https://www.facebook.com/125162620861384/videos/1330946327270312)

In honor of the fiftieth year of the independence of Bangladesh, the theme for Spring 2021 is “Fifty Years of Bangladesh’s Independence: Language, Literature and Culture.” Typically, the department holds two forums with speakers who are experts in the area of the chosen themes. Students are given an overview in the first forum and a more focused approach in the second so that they can design projects and presentations to reflect their understanding in connection with the courses they are enrolled in. 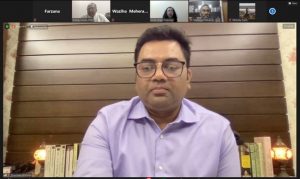 After being introduced by Professor Shamsad Mortuza, Pro Vice-Chancellor, ULAB, and Dean, School of Arts and Humanities, Professor Rafiqul Islam discussed the role of Dhaka University in shaping the social, political, cultural, educational, and especially the literary history of this part of Bengal that covers contemporary Bangladesh. He shared his lived experiences of the rise of Bengali consciousness in this land that ultimately led to the historic Language Movement and the emergence of Bangladesh. He talked about the role of Buddhir Mukti Andolon (movement for the emancipation of the intellect) in challenging the thought patterns of Muslim orthodoxy in Bengal and the continuation of the Bangla language movement in Assam and West Bengal. According to Professor Islam, Bangladeshi women writers are yet to write much on the Language Movement, and great literature on the Liberation War of 1971 is yet to be written. 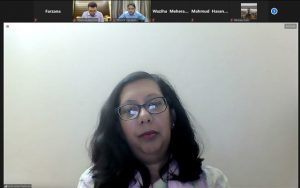 The CI First Forum was inaugurated by the Head of the Department Ms. Arifa Ghani Rahman and the forum was hosted by Vincent Dip Gomes, a

student of BA in English at ULAB.