DEH Organizes Talk on Nazrul Studies in the US

Home News DEH Organizes Talk on Nazrul Studies in the US

DEH Organizes Talk on Nazrul Studies in the US

The Department of English and Humanities at ULAB organized a talk on “The State of Nazrul Studies in the U.S.” on March 5, 2019. The program began with an introductory speech by Dr. Rafiqul Islam, Professor Emeritus at ULAB. Professor Islam introduced Professor Winston E . Langley and Professor Rachel McDermott, two prominent Nazrul scholars in U.S. Dr. McDermott, a Harvard graduate and a professor of Asian and Middle Eastern Cultures at Columbia University, described the challenges and promise of studying Nazrul in the U.S. She explained that the University of Chicago and University of Berkeley are contributing towards familiarizing this fascinating figure in the U.S. Dr. McDermott regretted that, because of insufficient translations and scholarly work on Nazrul, she had failed to teach Nazrul in the classroom. Dr. Winston E . Langley, a professor of Political Science and International Relations, and a human rights activist, viewed Nazrul as the writer whose words reflect the core values of the human race. Dr. Langley believes that Nazrul needs to be a part of larger learning. Dr. Gulshan Ara, an activist and Nazrul researcher who contributed to the introduction of Nazrul in global academia, termed Nazrul as the ambassador of peace and harmony, echoing the importance of introducing the philosophy and the works of our national poet to the world. The session concluded with an engaging question and answer round. Pro-Vice Chancellor Professor Shamsad Mortuza thanked the speakers for their thought-provoking ideas and wonderful endeavors. 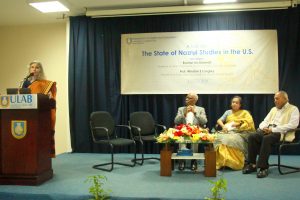